I want to believe…in Santa

My fingers were sore from unwrapping the piles of presents.  I took a rest and leaned against my newly acquired Barbie Dream House.  The bubble gum pink box advertised, “Over 3 ½ feet long!”  This was a
spectacular gift, highly coveted by other girls, I was sure of it. My next treasured present was a Minnie Mouse watch with a white vinyl wristband.  Minnie’s perky face smiled through the plastic case.  As
Auntie secured Minnie to my wrist, I was instantly transformed into a big girl.

Christmas Eve with my relatives was exciting for my brother and me.  Starting Thanksgiving Day, he and I counted down, crossing off dates on the calendar we got for free at the local Korean supermarket.  Rather than waiting until Christmas morning to open gifts, my family gathered together the night before and immediately following dinner, we tackled the mountain of gifts.

My aunts and uncles spoiled me during Christmas and gave me extravagant gifts like Barbie dolls, Milton Bradley games, and sometimes clothes and heart-shaped jewelry.  That year, my brother received an
electric race car set.  His eyes were wide with anticipation as he made his way through the tightly wrapped box.  With my uncle’s help, my brother set up his racetrack in the living room.  Shiny race cars sped
around the track, increasing their speed, until losing control and flying off the track into the tinsel-laden Christmas tree.

“Noona! Look, my car can fly!” he called out to me.  I was distracted looking at Minnie’s face and saw her gloved hands pointing at 10 o’clock.  In two more hours, Santa would make his appearance.

I first learned about Santa Claus from a classmate who said Santa came down the chimney on Christmas Eve to bring toys for good girls and boys.  That year, my aunts and uncles gave us so many gifts, I wondered what Santa would do to top off the bounty already gathered.

“Umma, can I stay up late tonight?” I asked Mom, trying not to sound like I was begging, even though I was.  She looked over at me and I knew what she would say before she said it. “Why?” She asked in Korean while picking up leftover wrapping paper my brother had scattered about.  She was folding the larger sheet to use for next year’s gifts.

“Because…” I hesitated. “I want to meet Santa.”  I said quickly as if it would prevent her from thinking I was being silly.  She paused from picking up the paper bits. “Are you sure?”

My heart began to beat quickly at the prospect of meeting Santa.  I ran across the room to the fireplace and sat with my new pink teddy bear, using it as a pillow to prop myself up for a Santa vigil.

The firewood was steadily crackling but the glow started to fade.  Sparks flew around and soon the fire died out.  It was a good thing because I was concerned about Santa burning his feet as he climbed down the chimney.  The leftover warmth of the fireplace put me to sleep.

I woke up in a panic thinking I had missed Santa.  I heard laughter from the kitchen and checked my watch, relieved it was 11:30.  I was almost there…30 more minutes and my wait would be over.  As I sat and
counted down the minutes, I wondered if someone needed to prepare food for Santa.  Would he like Korean food — some white rice and spicy tofu soup or did he prefer chocolate chip cookies — as the girl in my class had told me.  We didn’t have cookies but there were a few candy canes hanging on the Christmas tree.  I grabbed one, holding it tightly.  Looking at Minnie’s face, it was 11:53 and I pinched my arm to stay
awake.  I sat upright and watched the ashes fly around in the fireplace.

My aunts and uncles were playing a Korean card game in the kitchen.  I heard the plastic cards slapped against the table, followed by laughter.  Each card was slammed down to make a statement; it was a
great card or a crappy one.  Either way, they had make dramatic gestures since it was part of the fun.

Mom came out to check on me.  “Yunnie-ya, it’s almost midnight.  You have to go to sleep.”  Mom spoke gently.

“But Umma, he’ll be here soon…I want to wait for him.” I was determined.  I’ve come this far.

“Maybe you can wait for him next time.  It’s late and Aunties and Uncles are going to sleep soon.”  I knew this was not true.  I could hear them getting rowdier in the other room.  Someone had just won the
last hand.

“Ok, but go to sleep after that.”  Mom walked back toward the laughter.

Santa would be coming down the chimney.  I gripped the candy cane and stood up, leaving the teddy bear on the floor.  Waiting for sixty seconds to pass was excruciating.  Nervous, excited and tired, I started
shifting my weight, left foot to right foot and back again.  Midnight passed and as the time slowly crept by, I looked at Minnie’s face which was still smiling.  Her second hand circling until it was 12:10.

Mom came back out from the kitchen, looking at me, waiting for me to say something.  “Where is he?”  I asked her.  Mom did not have an answer.
“It’s ok, Yunnie, go to sleep.  Maybe next time.”

One of my uncles, who had been the loudest during the card game, came out of the kitchen.  He chuckled when he saw me.  “You’re still here?  Were you waiting for something?” I felt my face get hot and I looked down at the beige carpet.  Santa was not visiting us.  Disappointed, and not knowing what to say, I picked up my teddy bear, “Goodnight” and went to the guest room where my brother was asleep on the floor under a mass of blankets.

I went over to my sleeping area on the floor and put my teddy bear down.  In my hand, was the candy cane, still warm.  I wondered where Santa was.  Thoughts raced through my head.  Why did he forget us?  Was Santa real?  My classmate told me he was.  The shows on TV confirmed he existed.  Christmas songs made me believe in him, that he was making a list and checking it twice.

I put the candy cane on the windowsill and looked out the window.  I tried to rationalize why Santa did not show up.  Maybe it was because I got so many gifts this year, or maybe he had better places to visit, houses that did not have Korean food but Nestle Toll House cookies straight from the oven.

Whatever his reason was for not coming that year, I believed he would eventually show up, carrying a large bag of toys, in his bright red suit, laughing joyfully as he does on TV.

My brother and me, before the Santa vigil. 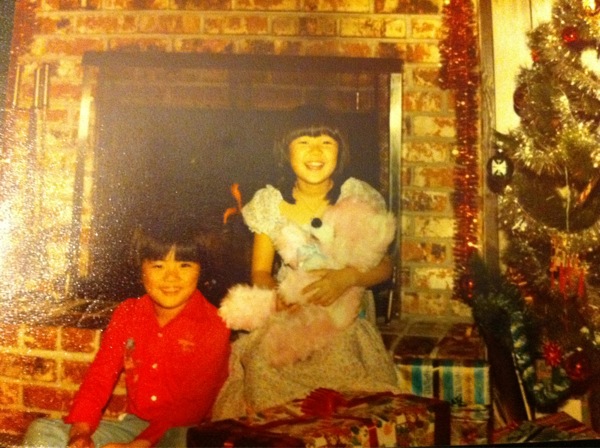