Shasta is not just a drink

One of the main attractions around the Shasta area for us was Mount Shasta. I had heard various feedback on this mountain: it was a dormant volcano, it was a place of spiritual healing, it was majestic. I also know that I drank Shasta soda at some point when I was growing up.

Traveling with Umma and Apa provided me with insight into their idiosyncrasies. Apa doesn’t say much while I drive. I don’t know if he’s bored or content. Uma on the other hand, is quite engaged. When she senses potential danger (i.e., a car next to us changes lanes), she braces herself and grips the door handle.

Before heading on to I5, I stopped by the local gas station to wash the dead bugs off the windshield. I didn’t fill up since I had 145 miles left to go in the tank. Umma asked why I didn’t get fuel because she was sure the gas station owners were hoping I would buy gas.

We got onto I5 and drove 45 miles the little town near Mount Shasta. I saw a sign that read, “Mount Shasta 14 miles.” We meandered along the road and eventually saw the official national park sign that welcomed us to Shasta-Trinity National Forest.

The Touareg hauled up the road. My ears popped, Butters slept in the back and Umma started her intermittent handle-gripping exercise. Apa was silent in the backseat. As the road narrowed, I could see we were high…really high and there was no rail to keep us from falling off the side of the mountain. As I was thinking this horrendous thought, Umma said, “In Korea, during my trip [in October], we all went up a very tall mountain outside of Seoul. There was a one-way road that tour buses had to share. The buses were timed. If one was going up the mountain at a scheduled time, the other knew to stop and wait for the oncoming bus to pass.” Umma continued in Korean. “There were no guard rails and the bus drivers were driving up the winding narrow road so fast, I got car sick. I thought we were all going to fall off the mountain.”

With this story and the subsequent visual it conjured up of unmentionable disasters, my palms started to sweat. I was also concerned about how much gas I had left. When I checked, it read, “60 miles.” As I was trying to remember how much we had climbed, Umma asked me if I had enough gas. The combination of Umma’s story about stressed out bus drivers in Seoul, and the Touareg running out of fuel and the increasing elevation, made me grip the steering wheel harder and my heart skipped a few beats.

Umma looked over at the navigation system and saw the curvy road ahead. She said it looks like we’re heading into no man’s land and asked about the fuel again. And this made me think about the poor bus drivers in Seoul, driving up and down steep and narrow roads all day long, on high alert, averting danger…I asked Apa, “How much longer do I have to drive?” Apa had been to Shasta many years ago so I hoped he had an answer to put me at ease.

“Is that a little more as in ten minutes or an hour?”

I tried loosening the steering wheel and release tension. I drove silently, taking deep breaths in and not remembering to exhale. I didn’t have the courage or skill of the Korean bus drivers so I eased around each bend with great caution.

After several minutes of intense driving, I saw off in the distance, Mount Shasta. 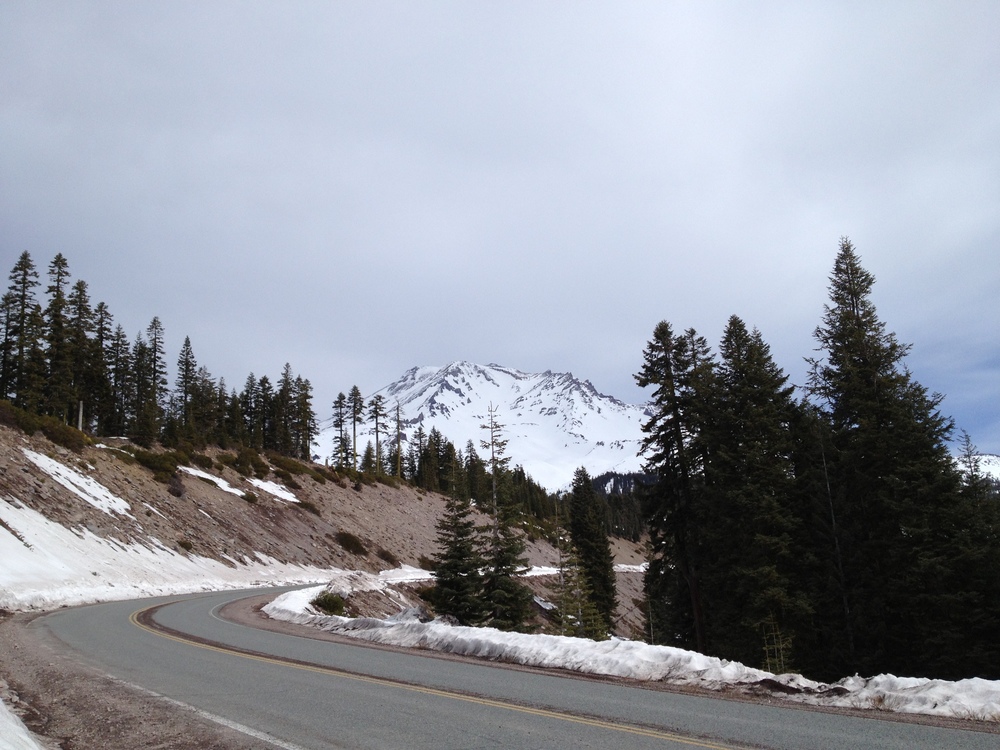 With the gas gauge stating 35 miles left to go and googlemaps indicating another 15 minute drive, I decided not to risk it. So we stopped and made our own lookout point.

Apa, Butters and me.