The day after Thanksgiving, we took a trip to a campground near Barstow, California. It was a free camping area called Sawtooth Canyon. Because it was a holiday weekend, the place was packed. Every time we take Bambi out, an unforeseen situation seems to arise. Sometimes it’s a minor issue (we run out of electricity in the trailer.) Other times, there’s a major problem… like the time the trailer was infested with mouse poop while in storage in New Jersey. Or when the tire blew out on the New York Thruway. Now that I think about it, I’m pretty sure those two unfortunate incidents happened during the same trip.

At Sawtooth Canyon, we drove around for a bit but couldn’t find a spot. As the sun started dipping down, I started getting nervous. The campground was about 20 minutes from the main road, which would mean towing in the dark to a different campground. It’s never ideal to tow at night. But it’s even worse when you have to drive on an unpaved road in the dark.

After taking a few more loops around the campground, we finally came across a spot that seemed fairly private. I backed in Bambi (it took a few tries due to the odd angle) and then we set up for the weekend. It is common courtesy to say hi to other campers in the vicinity. And as usual, we waved “hello” to a couple who was situated across from us. The husband came over and asked me some questions about the “rig” set up. How long is the trailer? What’s the horsepower on the car? Where did you get it from? Are just some of the questions that RVers tend to ask.

After talking to the neighbors, we settled into our routine: cooking dinner in the trailer and enjoying the view of nature as we ate our vegan burgers in the dim lighting. For some reason, the Airstream batteries did not charge completely. So knowing that we were low on battery power, we conserved electricity by using candles instead of the overhead lights. I know you would consider this scenario “glamping” because hardcore campers can’t or don’t light candles in their tents. But for me, it’s as close to camping as it gets.

The campground was exactly what we needed for the weekend. Three days of being unplugged from cell signals and wifi was a treat. We didn’t feel compelled to check our phones and in a way, it was liberating. I think it’s so easy to get sucked into living through our devices, rather than fully experiencing each moment as it happens.

At night, the sky was almost black. There were lots of stars but, I felt like the dark sky was closing in on me. And for a moment, I experienced a feeling of claustrophobia, even though the sky was vast. It was a strange sensation that I have felt only one other time while we were camping in New Mexico. That time, I felt like the trees surrounding the trailer were about to engulf me. Maybe this is what being in nature is about: experiencing sensations that our minds and bodies are not quite used to the feeling. In the still darkness, after my mind settled, I drifted off into a state of restorative sleep.

One of the highlights of that weekend for me was waking up early to take a peek at the rising sun. On the first two days, I missed the sunrise by a few minutes. But on our last day, I woke up and witnessed a sky so powerful, I ran out of the trailer in my pajamas to take photos.

It was in that moment that I realized that something unexpected always happens when traveling… and you never know if it’s going to be good or bad. In this case, it was nothing short of spectacular. 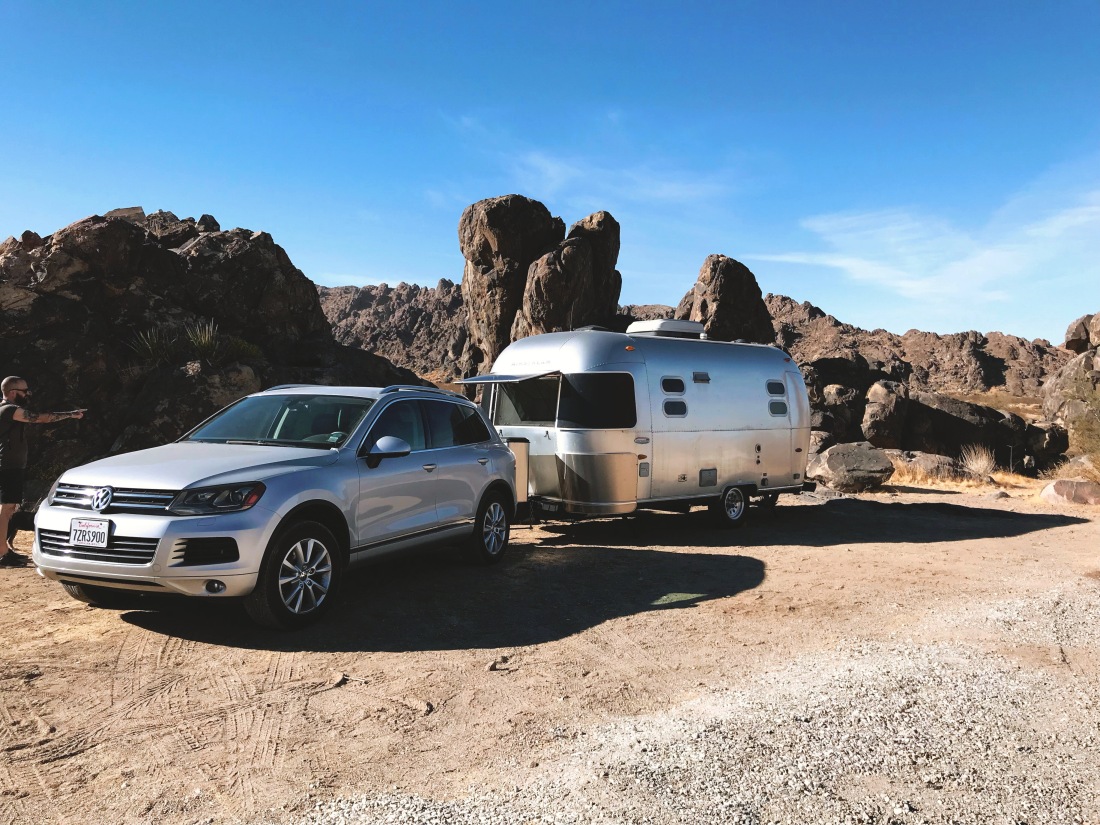